The Turin, Itala-based Aurora pen company, recently introduced a flex nib to its Aurora 88 line for the first time in its history. They has been making its own proprietary nibs since 1900.

"The use of a flexible nib doesn’t require any special instruction, but it does take some investigation to discover the lovely shading it is capable of." Bryan Hulser, Vice President of Sales and Marketing at Kenro (Canadian distributor of Aurora)said.

The nib on the Flex Nib 88 is a hybrid of Aurora’s traditional 88. There’s a formula to the weight, length and thickness of the point that allows the nib to flex and spring back to its original state.

The Flex Nib 88 is limited to 188 pens in eight colors of resin. Blue launched in March, red in April and May will debut a sunny yellow pen. 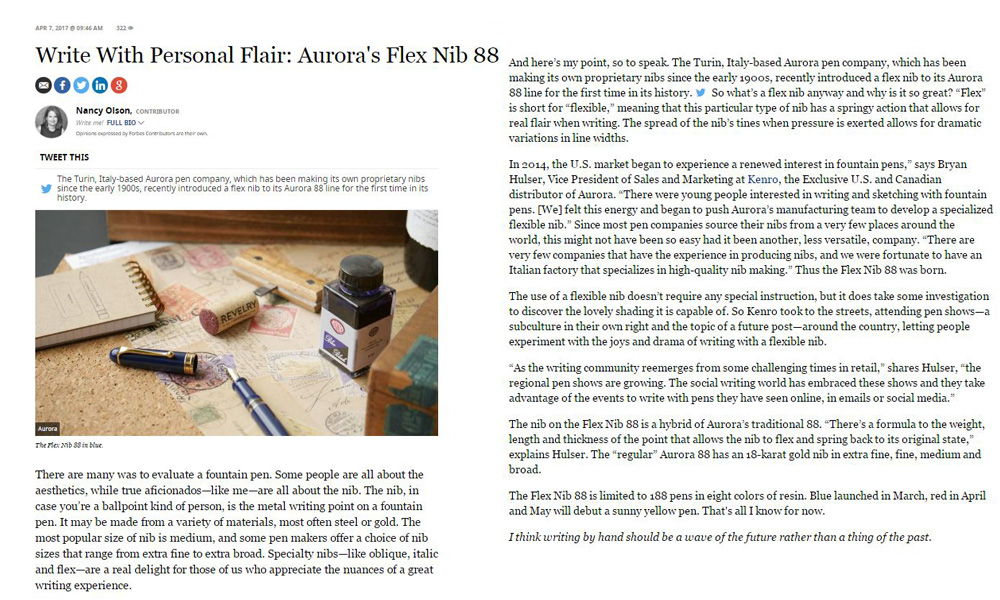 The first pencil may be traced to Northern Europe. HoweverWilliam Munroe, a Massachusetts cabinetmaker, is credited with producing the first wood pencil in the U. S. in the early 19th century.

Companies like A. T. Cross of Lincoln, are known for their early sterling silver pencil holders and such decorative items are the forerunners of the modern mechanical pencil.

The first mass-produced pencils were produced in Germany, thanks to a variety of companies including Graf von Faber-Castell. Today, it is one of the few companies that still places much emphasis on its wood-cased pencils, in addition to its lovely range of pens. 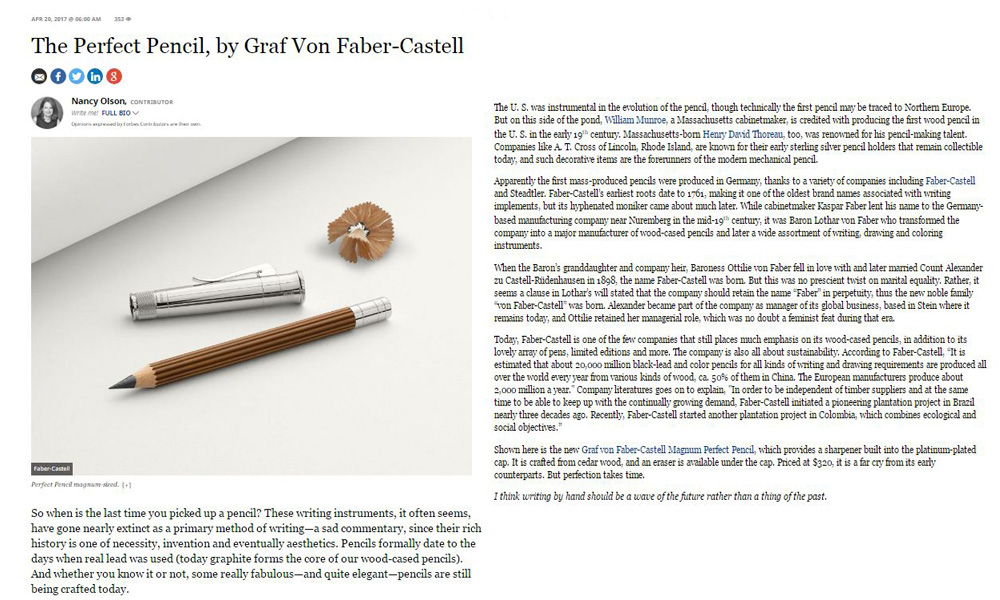 Montblanc and UNICEF united against school drop-out and illiteracy.

Montblanc and UNICEF celebrate their 13th anniversary. The luxury writing brand is at the forefront of a global literacy and child education initiative. For 13 years Monblanc has donated to UNICEF about 10 million Euros.

"It's unfortunate in some ways that we still have to partner with UNICEF because it means there's still a lot of work to be done" said Montblanc CEO Nicolas Baretzki.

For the latest limited edition designed for UNICEF "We look at the first steps that a child learns when writing"explains the creative director of Montblanc, Zaim Kamal. "The first marks or symbols that they recognize through six alphabets: Roman, Arabic, Korean, Chinese, Japanese and Hind".

The new collection includes the corporative color "UNICEF Blue" and the first letter of the six different alphabets that children use when they learn to write in the body of the pen.

Of all these pieces, Montblanc will donate 3% of the income to support UNICEF and its literacy projects, with a minimum amount of 1.5 million dollars guaranteed by the German firm. 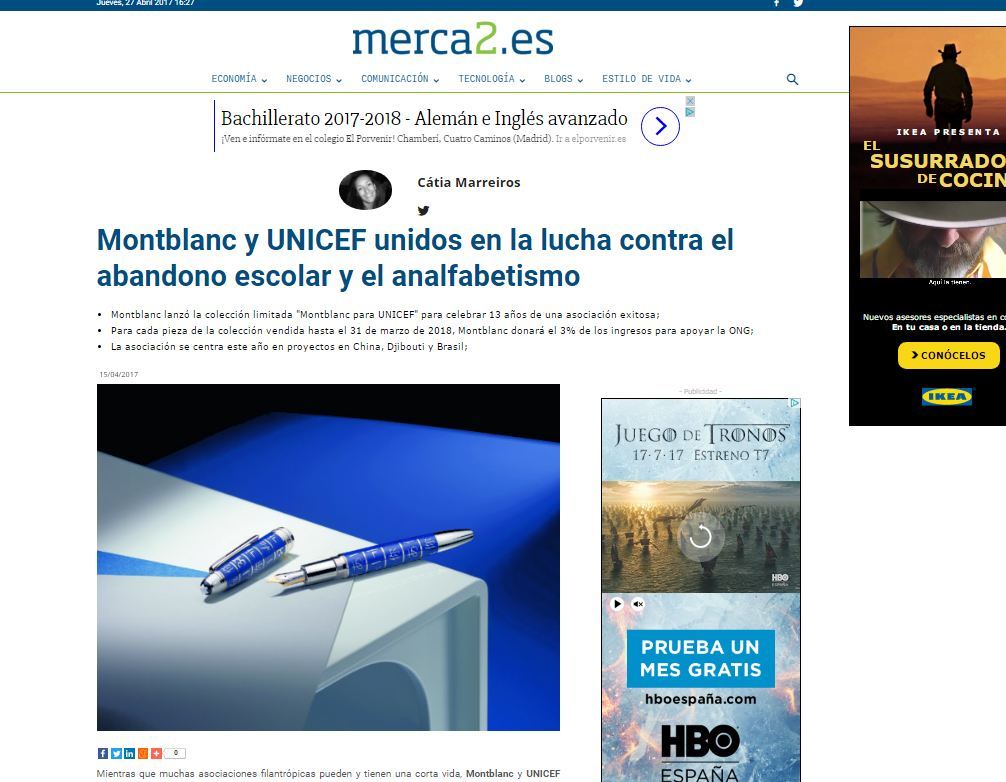 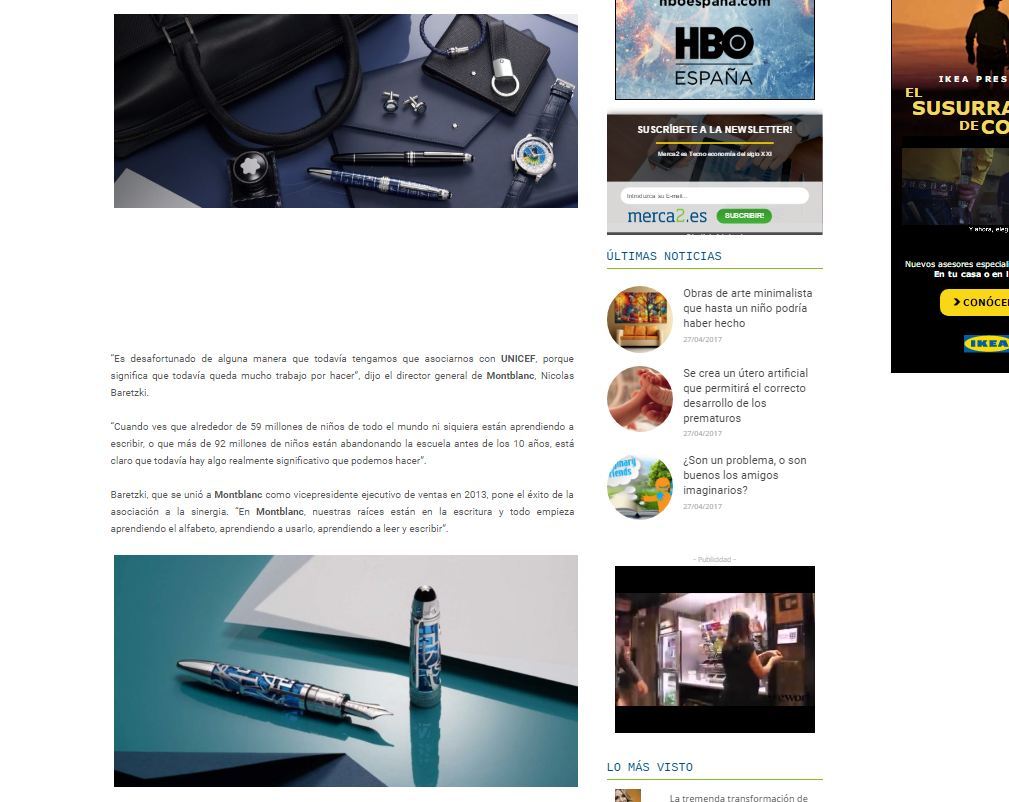 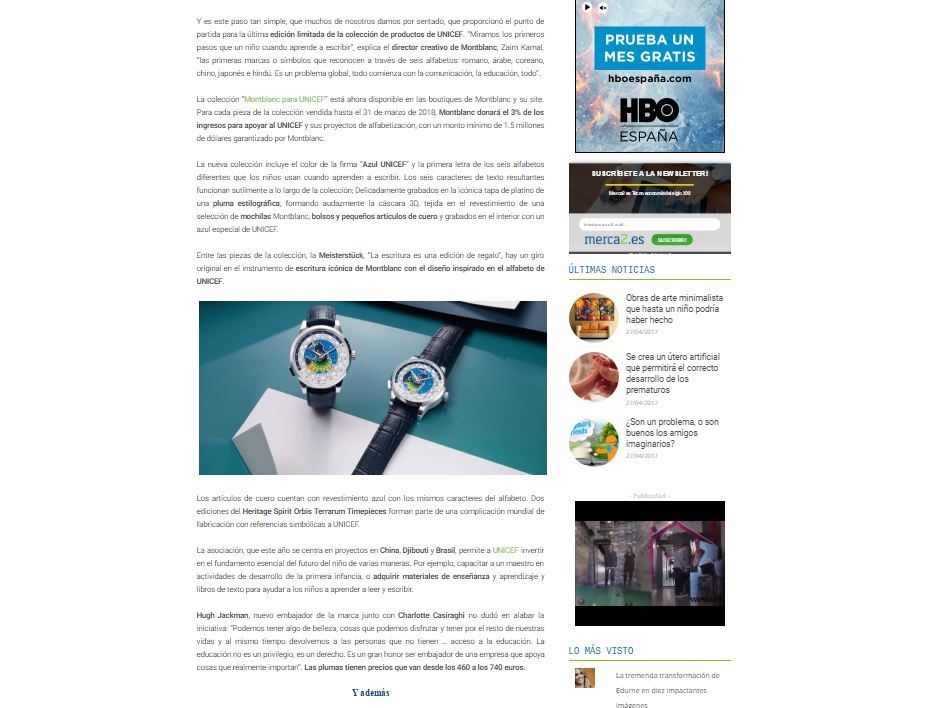 Summit, the first Montblanc smartwatch whose dial looks like a mechanical watch.

At the beginning of 2015 Montblancannounced the launch of the e-Strap, a module attached to the watch strap on whose small screen the user had access to the basic information of his phone. We would never see a smartwatch with the name of Montblanc they said at that moment.

However two years later this has completely changed. "It was the technology that motivated this change" said J. Lambert, CEO of Montblanc. "At the time we launched e-Strap, applications were very limited".

This clear commitment to the latest technologies is reflected in products such as the Smart Label to have the suitcase located or the Augmented Paper, the book with electronic recognition of writing that allows to store on a digital file what we are writing on paper.

But certainly its strongest bet is the Montblanc Summit the first smartwatch with curved sapphire crystal or heart rate sensor. The sphere reproduces with fidelity the one of the 1858 Chronograph Tachymeter Limited Edition, one of the most valued pieces of Montblanc. 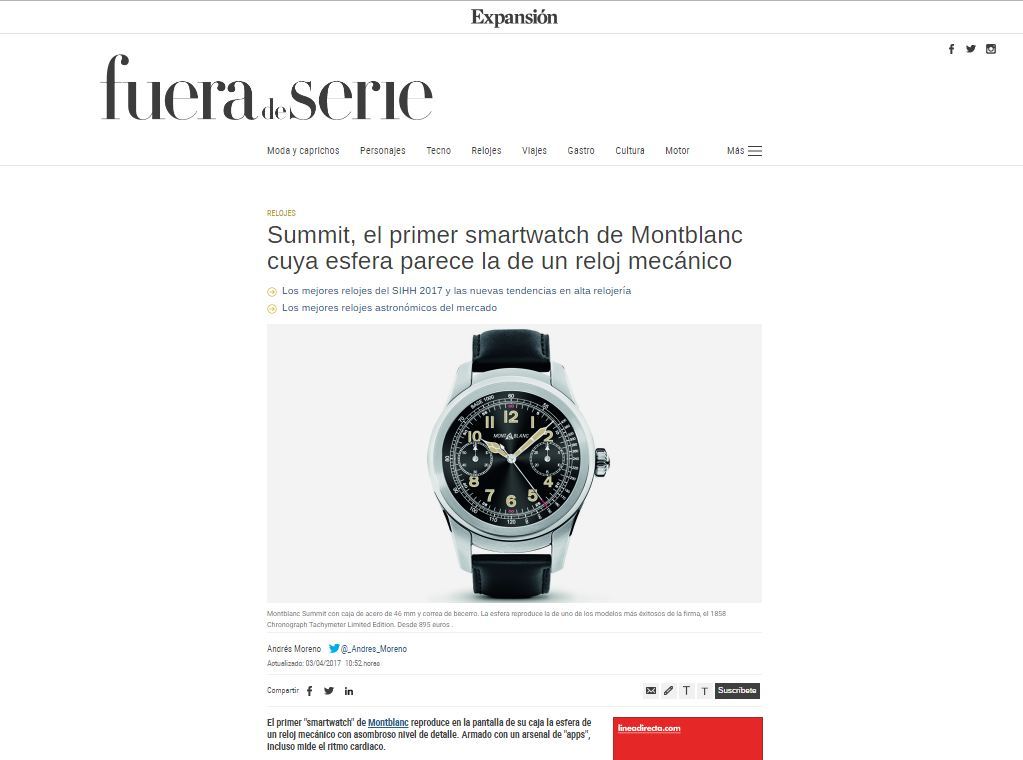 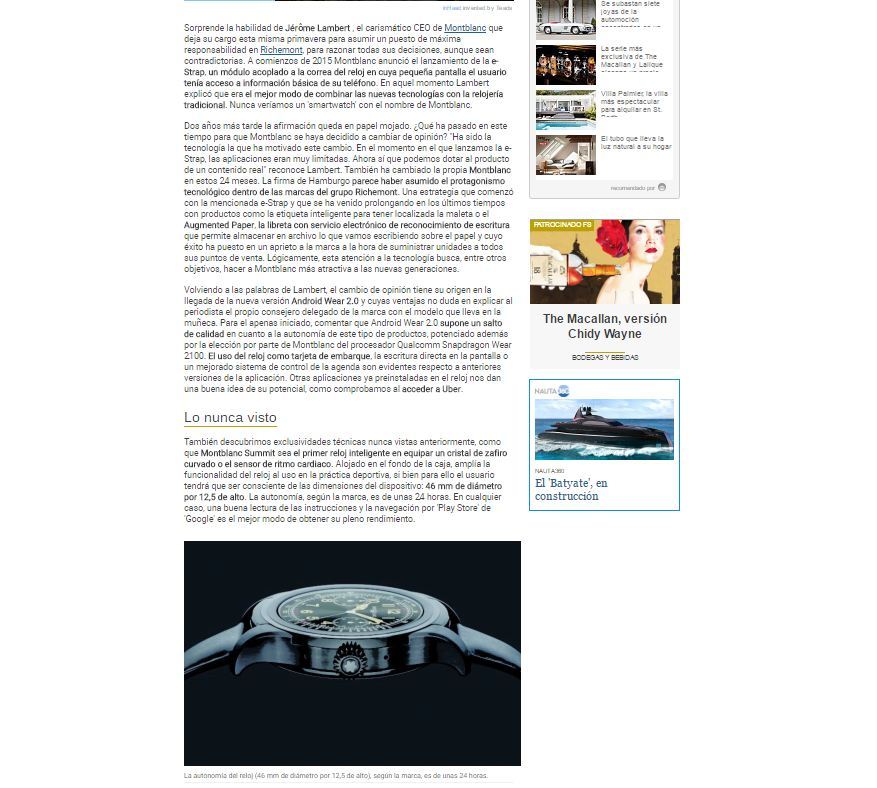 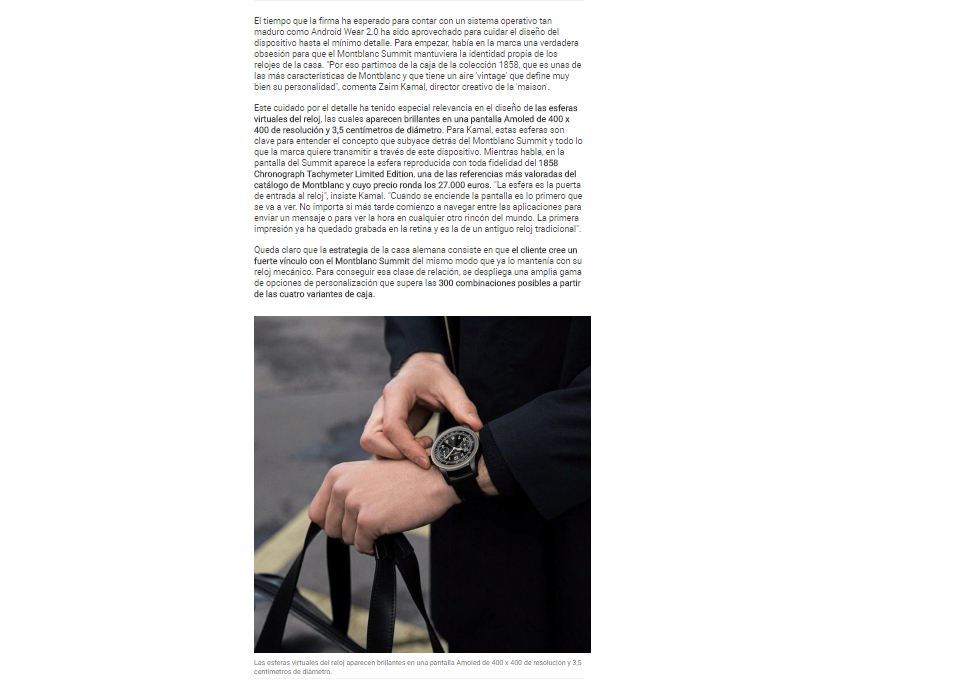 The pen as a symbol of power

L. D. Watermanrevolutionized universal writing. In 1883 the first fountain pen was born. However the mechanism was still quite rudimentary and not as aesthetic as today's fountain pens.

A decade later George S. Parkerimproved the feeder, reproducing Waterman's advance of not staining the paper and also getting no ink stains. The solution was presented by a curvature presented by the feeder, causing the excess of ink to remain inside the nib and at the end of the pressure it returned to the internal capillarity of the pen. Parker developed during the 1920s another system called Vacuum-filler (fill by vacuum), this mechanism filled ink itself the body of the pen by pumping on a diaphragm rubber.

Despite this progress, the pens began to replace them. The pen settled during the decades of the 50 and 60 and the fountain pens were falling into oblivion. But suddenly came the nostalgia in the eighties resurrecting it and becoming from being a necessity to a symbol of power and distinction.

From that moment the emblematic brands of fountain pens understand this conception of the personality that is forged through the fountain pen, rescuing the classic lines with improved form. There are limited editions and reissues, even new brands were born in the sector, such as the Italian Delta in 1982 and Visconti1988, backed by the exquisite Italian luxury like the traditionals Omas, Auroraand Montegrappa.

We can not forget as a symbol of luxury and power to the brand Montblanc. Highlighting the Meisterstück 149, which has been a companion of numerous famous figures since its launch in 1924. The "power pen" as they call it is black and robust, a classic. But the soul of the Montblanc pen is in the nib, a piece with a very detailed work resulting from 30 processes and many weeks of dedication. They are made of gold between 14K and 18K. 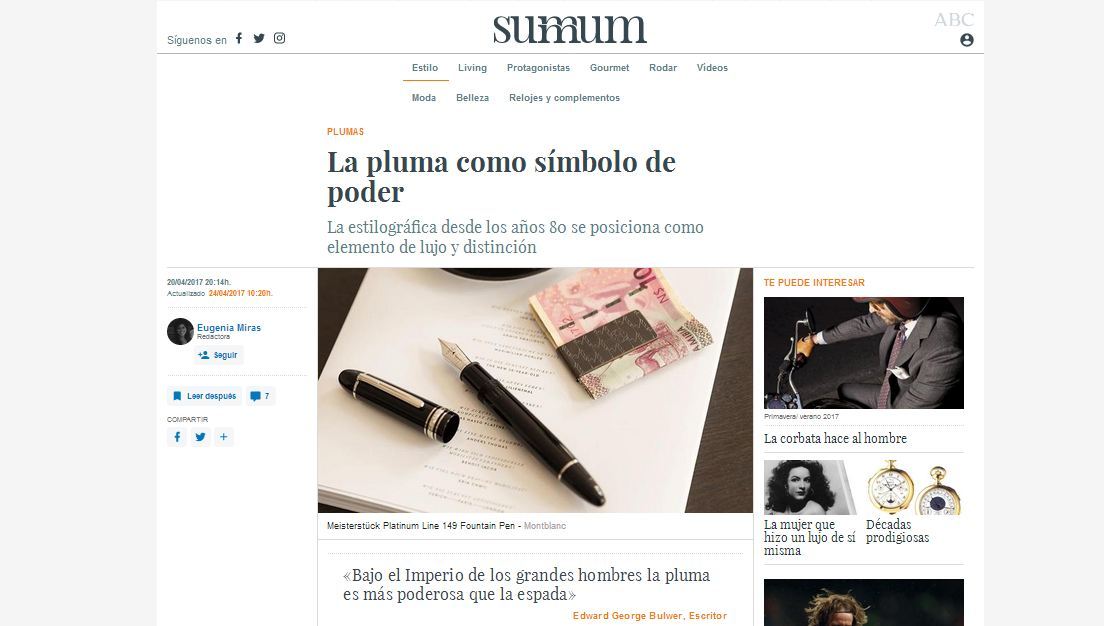 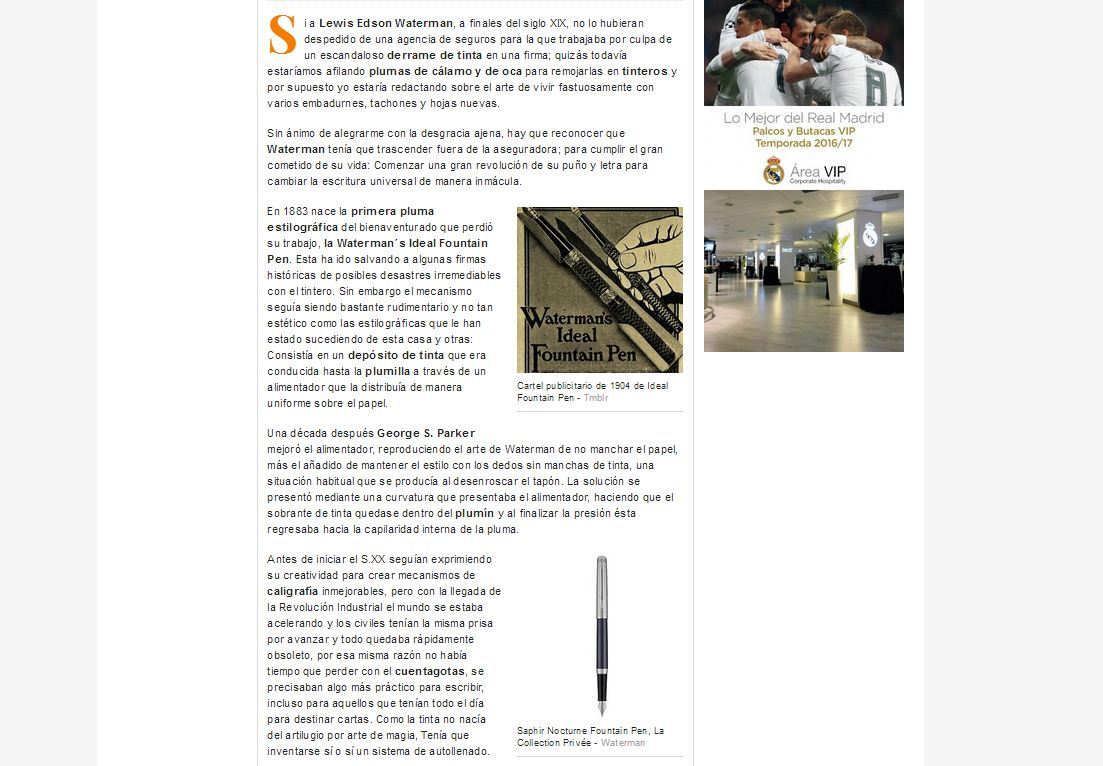 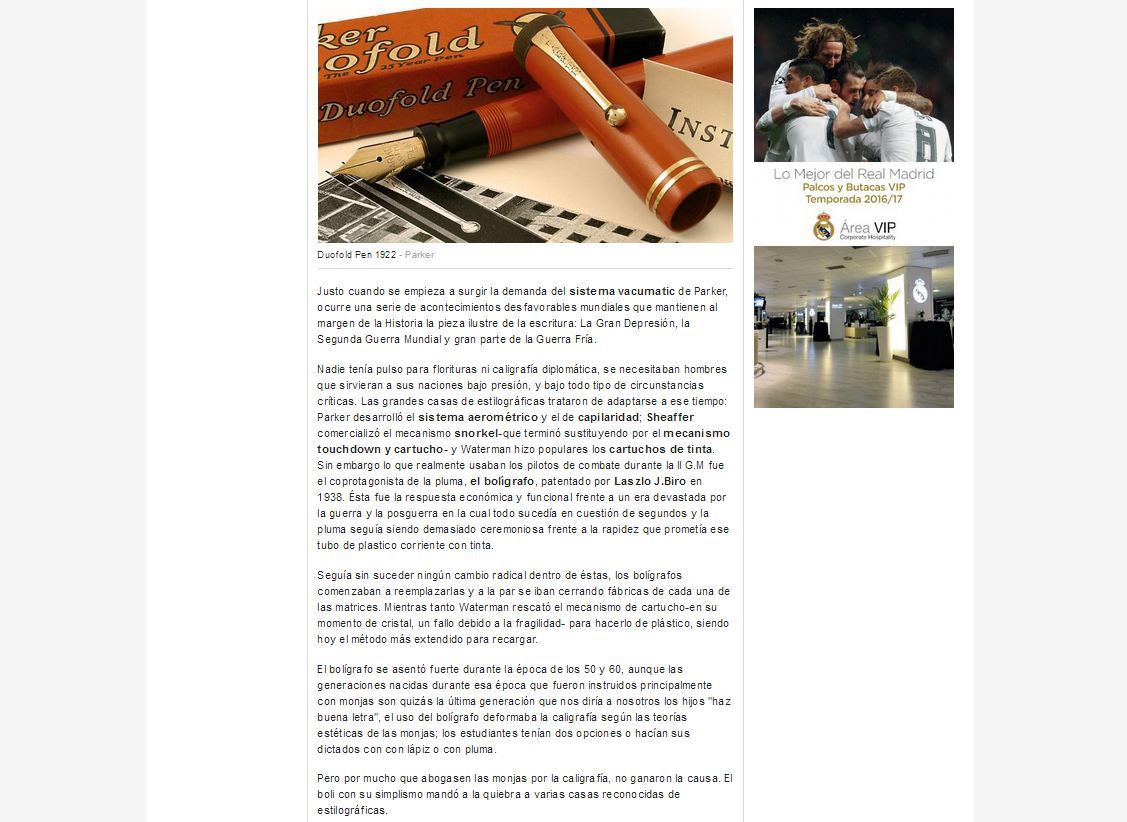 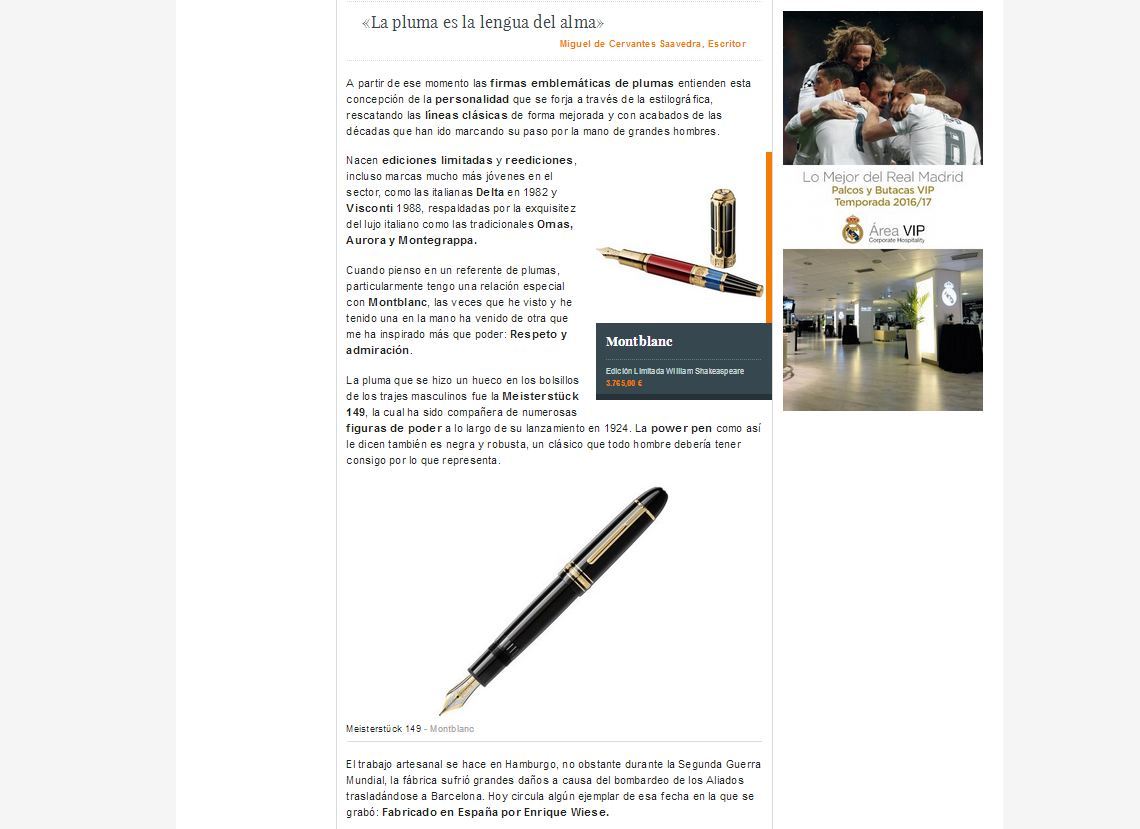 To celebrate its 130-year history Eberhard & Co. has presented several important novelties in the recent Basel 2017. The Scafograf GMT diving watch and two versions of the Chrono 4, an emblematic model with the patented design.

To celebrate this anniversary, they has created the limited edition Eberhard & Co Chrono 4 130, only 130 units will be made. 42 millimeters diameter case in satin steel and polished details in which it emphasizes an original skeleton sphere.

The name of the model is shown on a rhodium plate that is attached to the central plate by two screws, wearing the emblematic Eberhard & Co. emblem that already appeared in the first chronograph in 1919.

Caliber EB.251 12 -base ETA 2894-2  with rhodium plated finish and blue screws, it presents the particularity of offering the measurement of the time in a structure of four spheres besides a discrete window for the date at 12 o'clock. It is submersible up to a depth of 50 meters and is completed with a gray-black carbon strap and a custom steel closure. 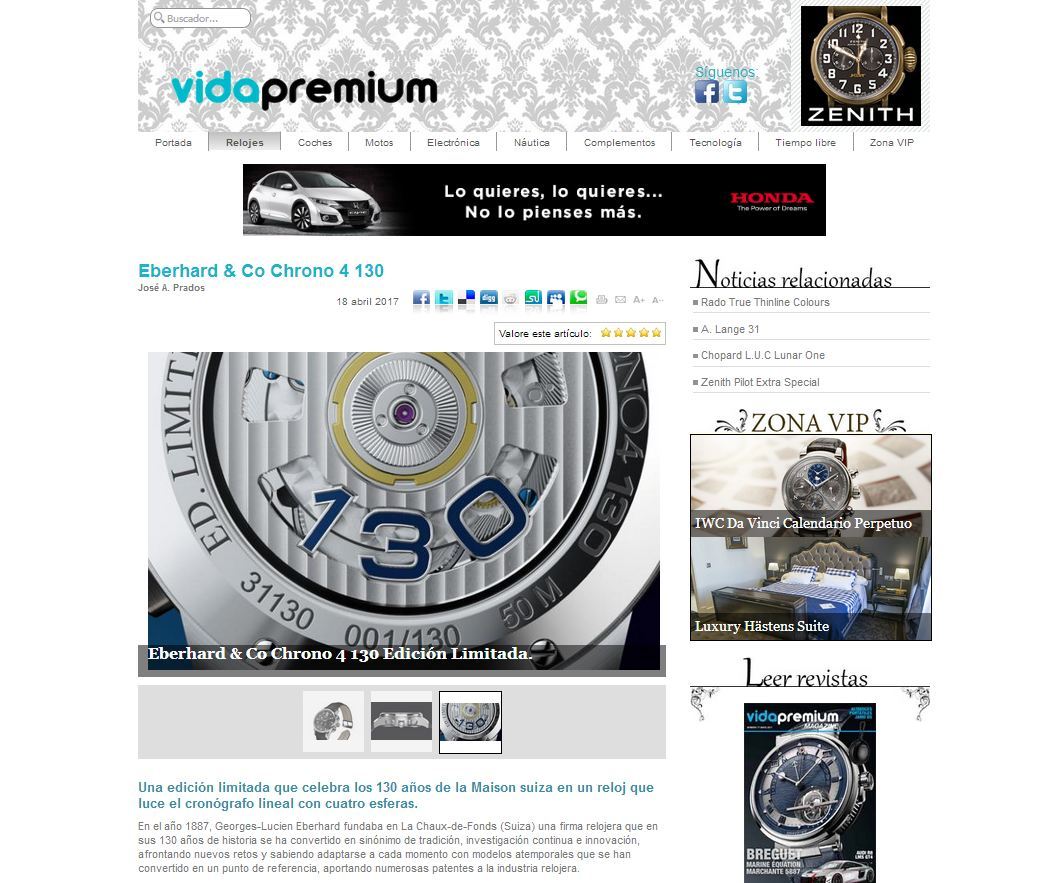 Turn your watch into a smartwatch with this strap

After launching its first smartwatch last year, the Swiss brand Frédérique Constant goes beyond presenting its smart strap, capable of turning any mechanical or quartz watch into a smart one. This strap is called e-Strap and has a small module in the buckle that makes it very discreet and comfortable.

The smart module is integrated with a rechargeable battery and works via Bluetooth. All activities can be registered on an iOS or Android compatible mobile phone. The clasp is available in steel and finished in pink gold and yellow gold. 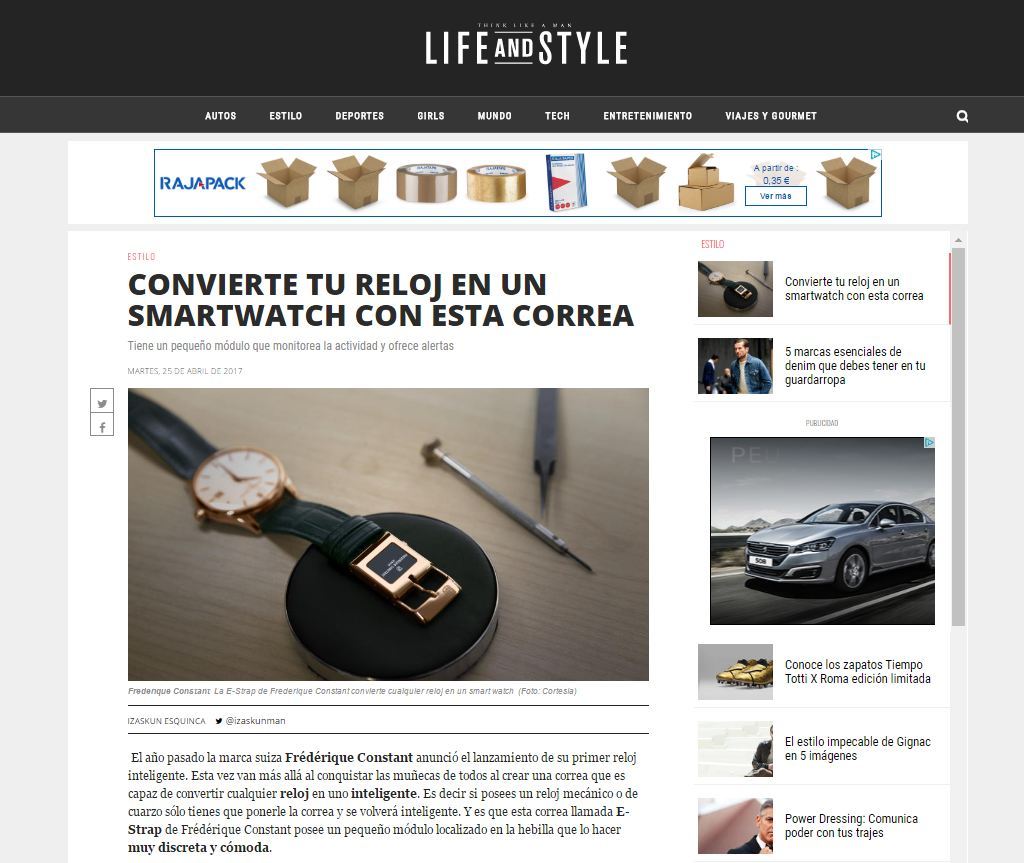 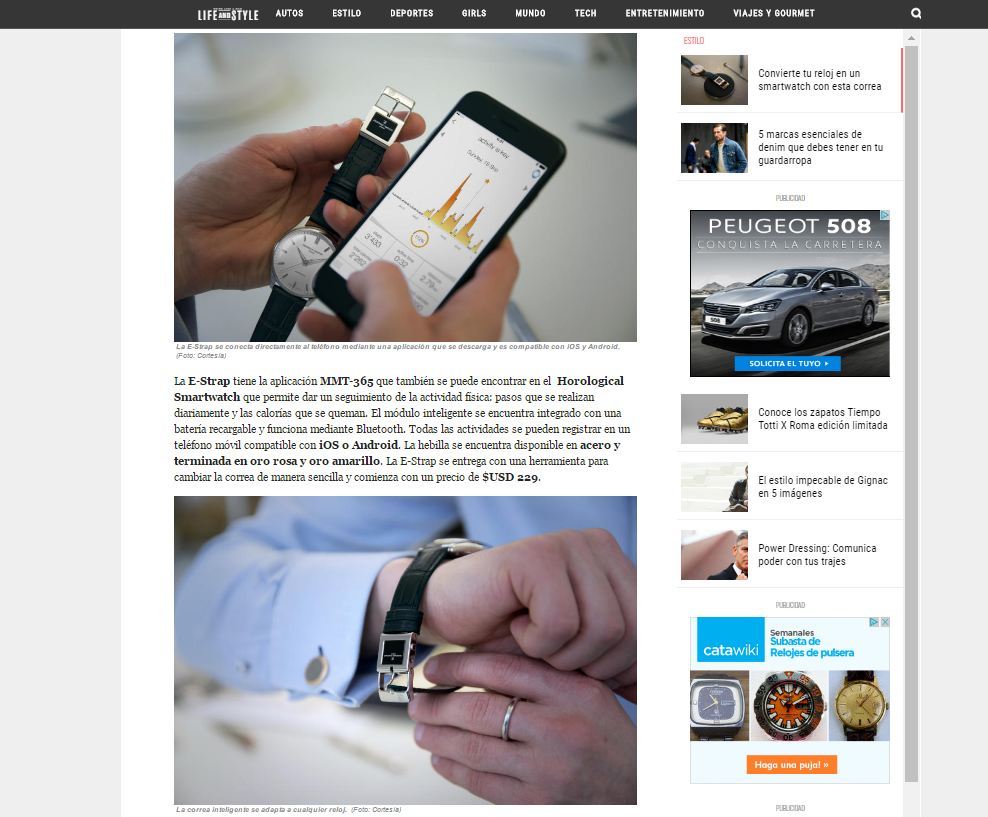 Baselworld 2017 closed its doors a few days ago and there were many new versions of legendary models that show us back to the golden years of the haute horlogerie. But the truth is that behind that climate of celebration hides some concern because many brands are far from living their best times.

According to the Swiss Watch Industry Federation, exports fell 10% in 2016, the worst year since 2009.

This has awakened the industry, which has realized that it has to start changing something to capture the millennial buyer. That is why more and more brands have taken the step towards smartwatch and have gotten into a market hitherto dominated by technology firms such as Apple.

But more significant is that more and more Swiss historical manufactures join this trend, such as Tag Heuer, Alpina, Breitling, Mondaine, Frédérique Constant, Tissot or Montblanc.

Alpinais a Swiss house with 130 years of history and great tradition developing submersible mechanical watches which has made possible a submersible watch with a smartwatch characteristics.

All its functions can be activated through the crown to not depend on a touch screen, and include activity and sleep tracking, call notifications and mails and updated universal time, among other benefits. It connects to iOS or Android smartphones through the MMT-365 app. The bezel is available in four colors: green, black, navy blue and orange.

It has the appearance of a conventional watch, but it hides a connectivity via Bluetooth with a smartphone that offers features such as activity and sleep tracking, sleep cycle alarms, Get-Active alerts and smart coaching. 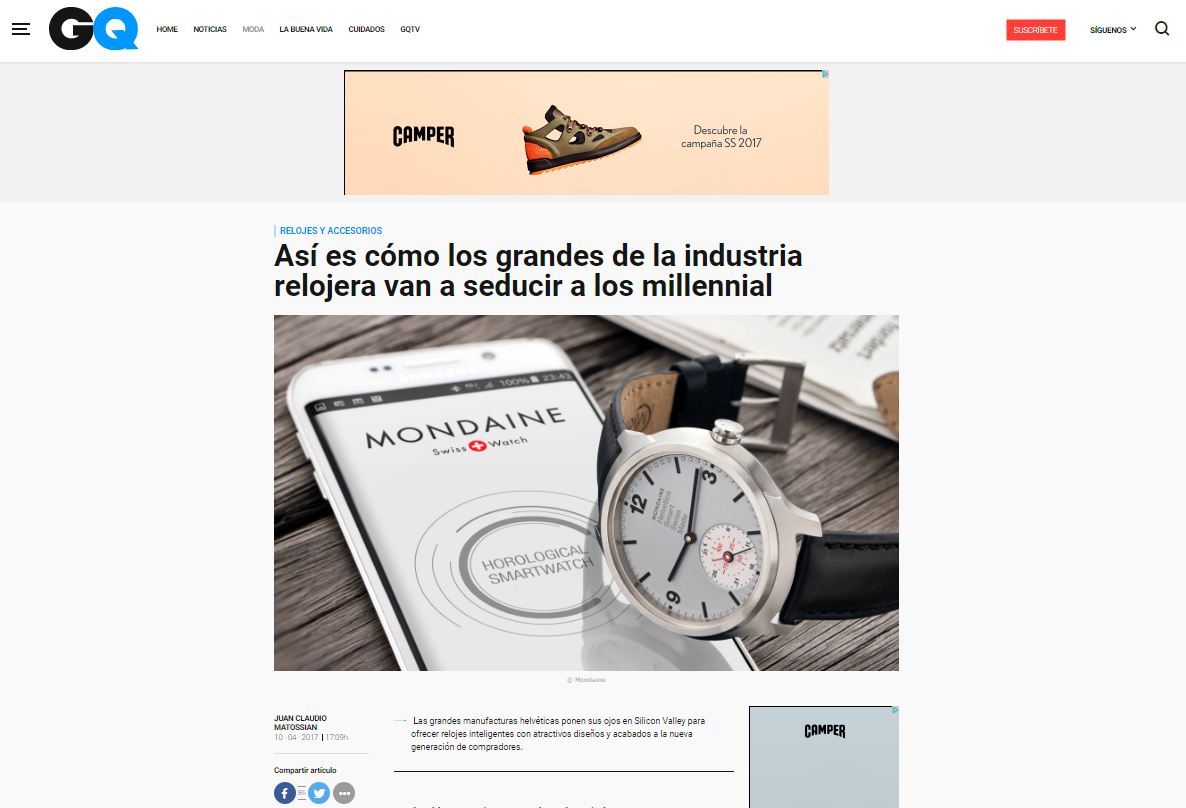 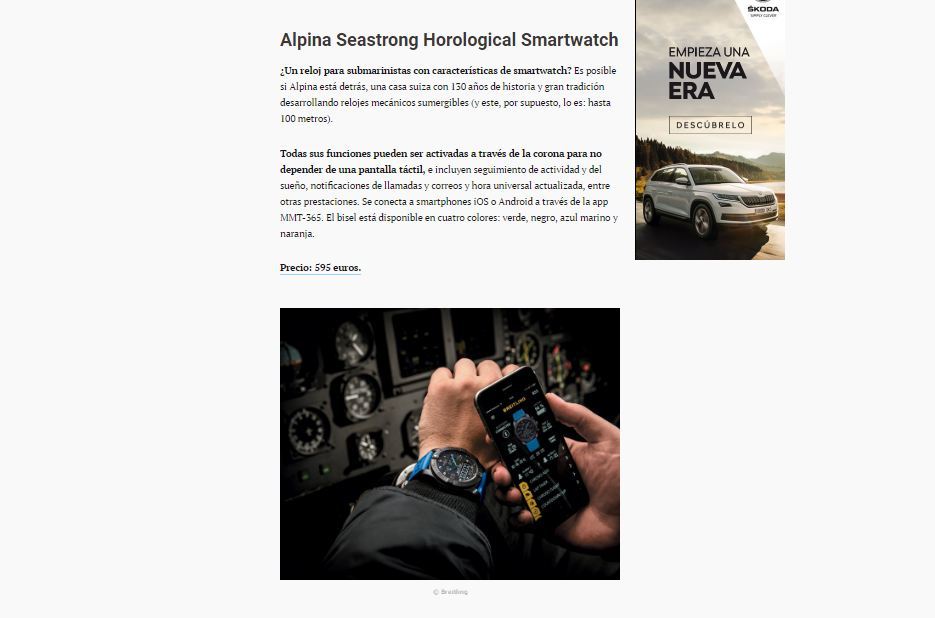 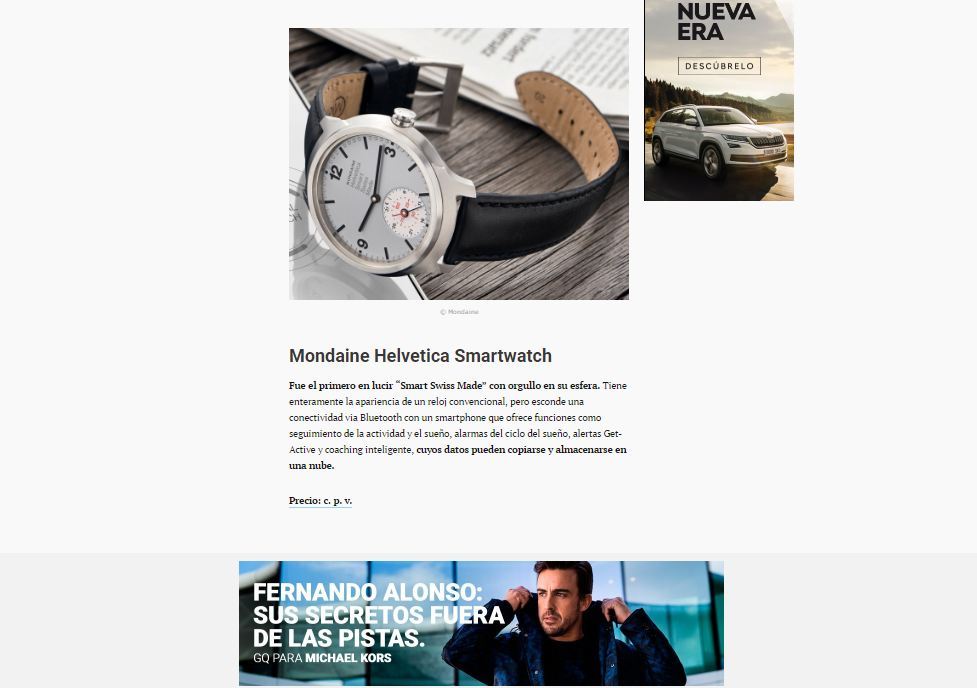 The Swiss company Raymond Weil has introduced a new watch design inspired by the classic Gibson Les Paul guitar, called 'Gibson Les Paul Black Beauty Watch'. It is a model of collector limited to 300 pieces. With this watch the company based in Geneva reinforces a collaboration with the Gibson brand that began in 2015.

The renowned Swiss watchmaker wanted to pay homage to both the legendary Gibson brand and the pioneer of modern music; Lester William Polsfuss, better known as Les Paul.

"When I was a child, my mother introduced me to the world of music. In the first place were the stringed instruments and the piano. I discovered rock 'n' roll and electric guitar riffs during Slash performances along with Lenny Kravitz and Guns N 'Roses. Music has the power to impress people. Blues, rock, pop, classical ... we all have memories about a concert, a piece of music or an artist that is deeply linked to a key moment of our lives. Today Gibson leads us to the best that rock can offer our watches thanks to its legendary pace, "says Elie Bernheim, CEO of Raymond Weil. 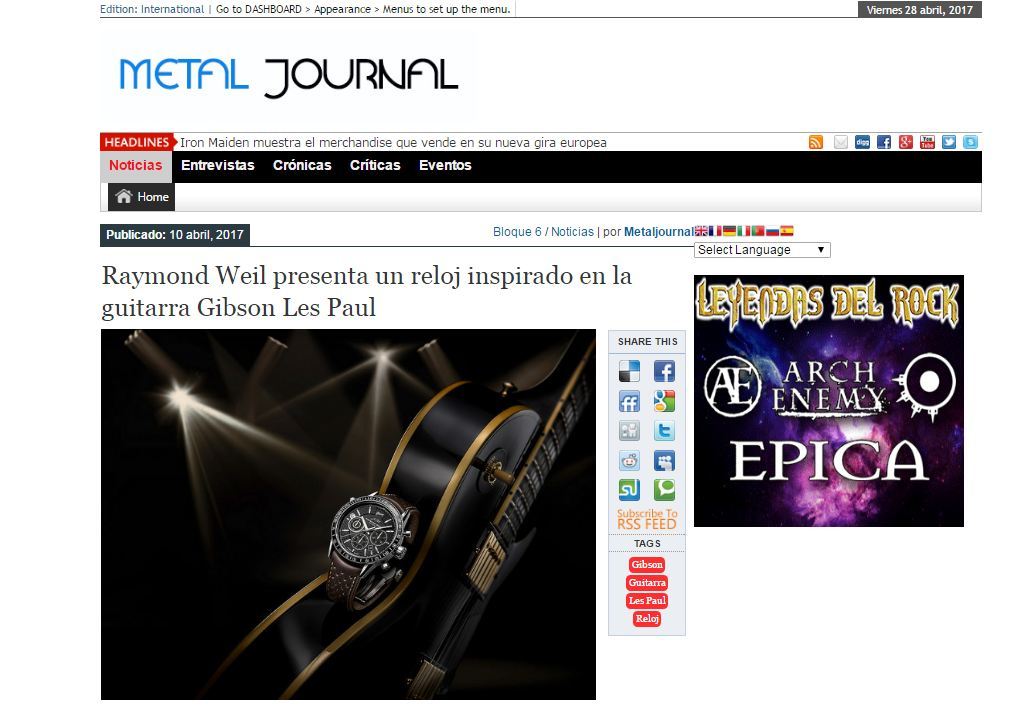 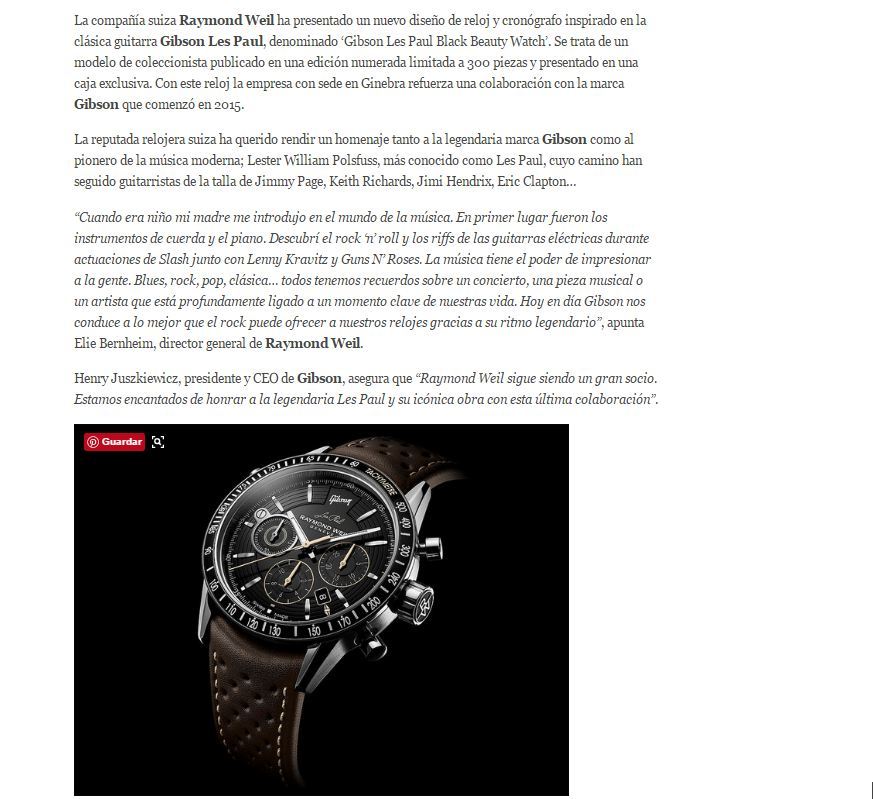 Magic sphere turns what is written on paper into digital format

The Italian brand Moleskineopens the door to the digital age with its smart writing set. It is a combo made up of the "Moleskine Esferus Plus" and a paper Tablet; A device with the shape and size of a tablet like any other but with sheets of paper inside. These two features allow you to combine the traditional writing experience and the opportunity to digitize annotations with the ability to edit, share and modify each document.

Its appearance is that of a traditional pen and writes like any other but has an internal camera with infrared system that tracks what is written on the sheets of the tablet and at the same time digitized it.
Once your content is digitized you can leave it in its original version, written in its own handwriting or change it and convert it to any type of digital typography. 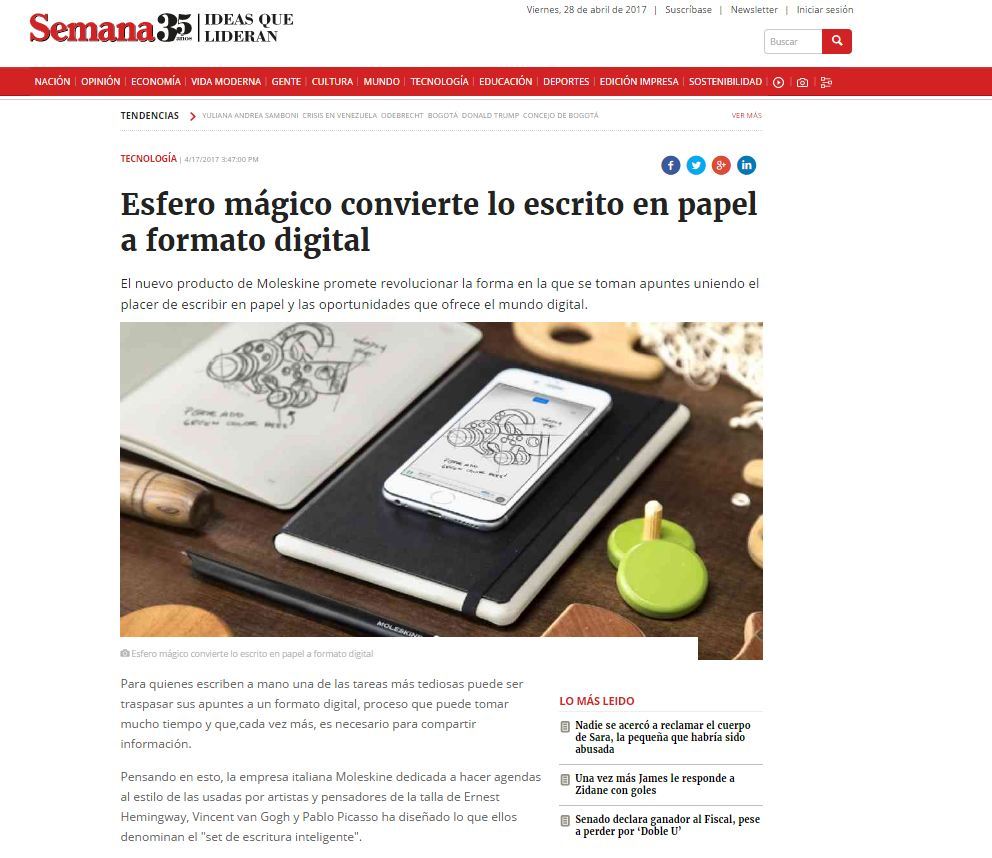 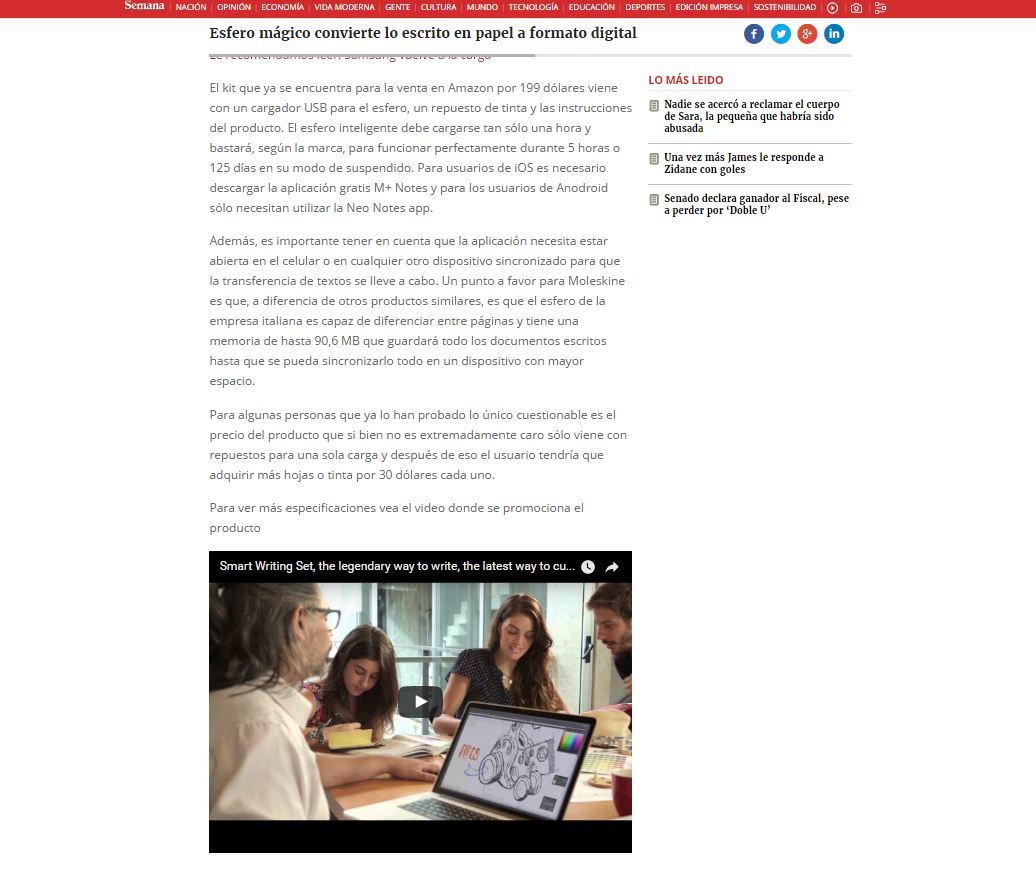 Find all the featured products of March at Iguana Sell.

In addition, you can visit our Boutique in Núñez de Balboa 90, Madrid to know these pieces in person.

Do not hesitate to contact us if you have any questions about the products, we are at your disposal.