All pieces now in stock

In 1832, German chemist Carl Hornemann founded its own colour and ink factory in Hanover and  Pelikan was born, although the brand considers its founding date the 28th of April 1838, the day when they released their first price list. Four years later, in 1842, Mr. Hornemann started producing at a larger scale, as he moved from his original factory in the countryside to a factory in the Hainholz area of Hanover.

It isn’t until 1871 when also chemist Guenther Wagner takes over the control of the company, making the Pelican, his family emblem, the logo of the company. Under Mr. Wagner management, the company started to expand its activity internationally, and the Pelican with its four chicks became a trademark in 1874.

The apparition of their first ever fountain pen will have to wait until 1929, when their trademark Green shaft was born, featuring a transparent ink window and innovative ink flow, a true revolution of its time. Since then, the German company has successfully developed a wide variety of fountain pens of different sizes, prices and characteristics, as well as many highly demanded limited and special editions.

At Iguana Sell, we are proud to include  Pelikan’s most wanted writing articles on our online catalogue and boutique, as well as some luxurious special editions for collectors. Their collection is categorized by sizes: their M100 models the slendest, the M800 and M1000 their most oversized and the M600 their standard fountain pens. Usually, the larger the fountain pen, the most luxurious it is, featuring details such as a solid gold nib,  Maki-e designs or Raden decor.

Pelikan’s slender fountain pens. The Classic series fills the role of an upscale though still entry-level Pelikan. The  M120 is a vintage-inspired collection which keeps the traditional shape and original material for the nib and barrel, combined with Pelikan’s “new” piston mechanism. 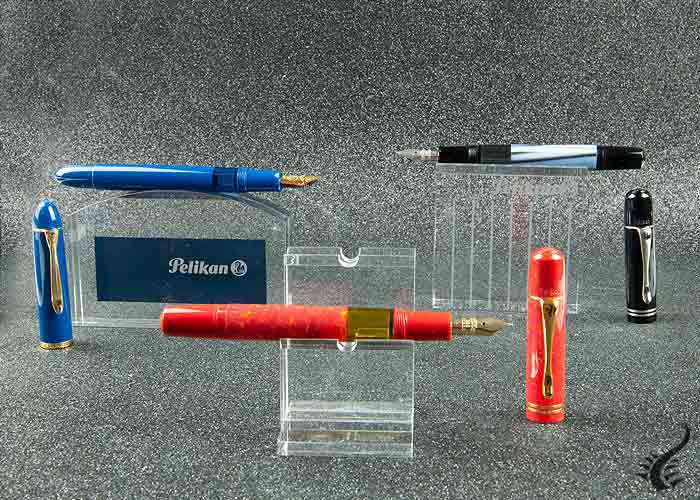 The  M200 collection pens are Pelikan standard size (same as M400, although they might be considered small for today’s standards) featuring a piston-filling mechanism and stainless-steel nib. The 205 model is equipped with a 14K gold nib. 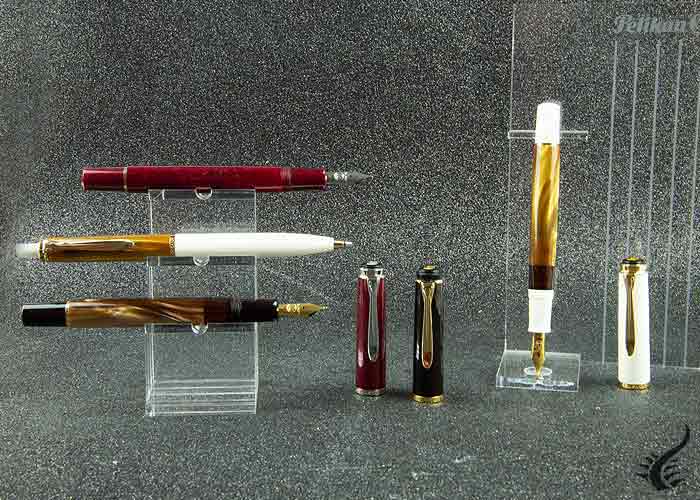 Pelikan luxury lines, priced accordingly. The level of trims, finish and nibs are significantly more luxurious than the ones of the Classic series. The  M300,  M400 and  M405 are considered standard sizes (being 300 slightly smaller than 400, and 405 slightly bigger) and feature a 14K solid gold nib.

The 400 model was first released in 1950 after the war trauma, and it’s easily recognised by its black and green striped shaft, and was (and still is!) one of the most popular pens at its price range. 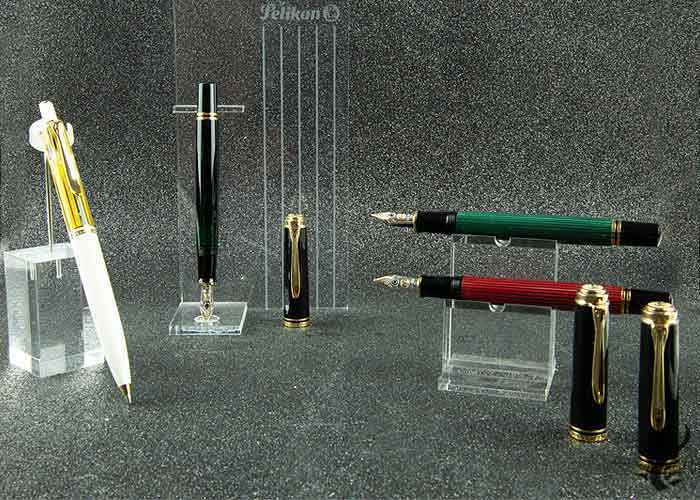 The  M600 are the medium-sized Pelikan Soüveran pens, with a piston filler and a 14K gold nib. They are bigger than the standard 400 pens, but remain light and nimble. The  M605 are slightly bigger in size, but the nib is usually the same. 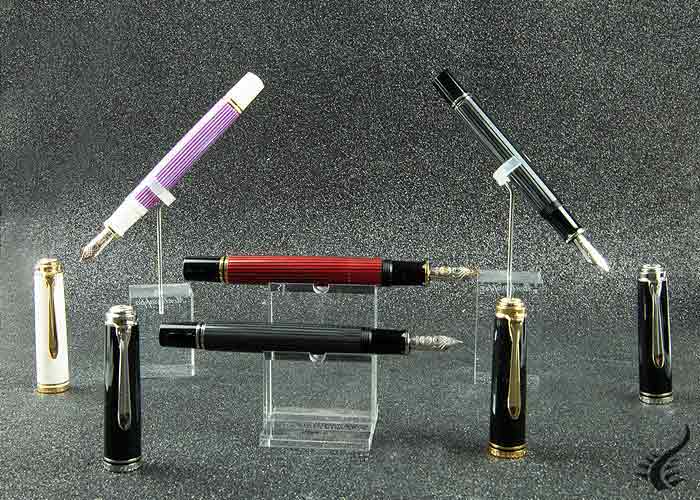 The Pelikan  800,  805 and  1000 series are the brand’s most oversized and luxurious fountain pens and feature the brand’s iconic 18K solid gold nib.

At Iguana Sell, we also offer some special vintage editions, such as the  101N series, which are small by today’s standards but are available with some phenomenal nibs. You might find them with cork pistons and hard rubber components, and are a must for Pelikan’s collectors worldwide.

The Pelikan  Ductus fountain pens present clear lines, hence the name, which is Latin for guidance or leadership. Their body is made of resistant yet smooth lacquer for a shiny, polished finish.

The  Pura special edition pens combine simple elegance, reliable functionality and high-quality materials. The Pura pens are as long as the Pelikan 805 ones, but considerably lighter and slender. 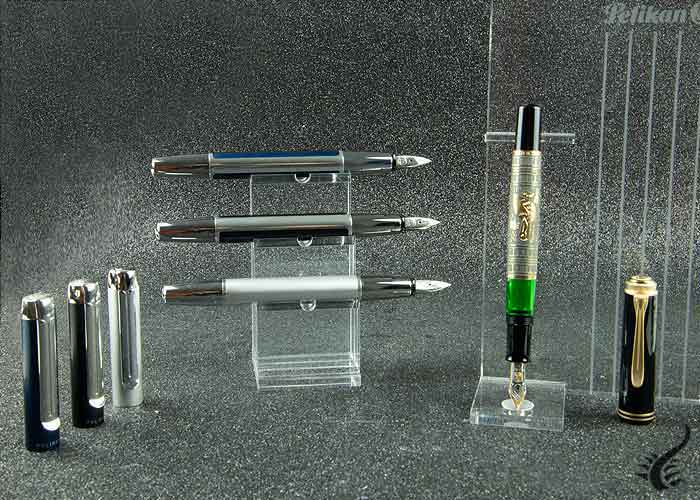 Finally, the  Toledo fountain pens feature exclusive designs made by hand using the ancient Arab technique of decorating with Damascus. This art consists of engraving a pattern into the surface of steel or iron objects. Next, a thin sheet of gold is placed over the pattern and finally embossed deep into the material with the help of a little hammer. The object is then heated to approximately 800°C and, by doing so, the steel surfaces will oxidize and turn black, while the gold starts to shine. The Toledo pens are standard sized, so the barrel is as big as the M200/400 pens.

A Pelikan Hub is an event which takes place each year in several locations all over the world, a place where Pelikan’s fans have the opportunity to share their passion for the brand’s pens. All Pelikan Hubs take place the same day at the same local time, and they act as a platform for fans to associate ideas, get to know more about the brand and share their vision of handwriting. At Iguana Sell, we have proudly been Hub Masters in 2019, when we hosted the Pelikan Hub taking place in Madrid. Unfortunately, the Pelikan Hub 2020 is cancelled, since the risks of spreading Covid-19 are still high. However, we look forward to hosting more Pelikan Hubs in the future when things will go back to normal! If you have any questions regarding Pelikan pens or need assistance when purchasing your perfect pen, do not hesitate in contacting us - we will be glad to help you!

Since having the bag I’m been very pleased with it , it looks good and there’s lots of space in it would definitely recommend it .

Love the watch what caught my eye was the back part like the blades on a jet engine.
Something you actually would believe a pilot would wear

Having purchased this new watch I am very pleased with it as it is both comfortable to wear and easily adjustable for a nice fit around the wrist. With a large face and clear display reading the time along with day and date is easy. Accurate time keeping is also a key feature of this watch .

This fountain pen is lovely to write with: the nib writes smoothly, and the pen feels nicely balanced when capped. The colouring of the barrel and cap is very subtle and the fact that the metal parts are silver -coloured creates a very classy -looking pen. The converter works well, which isnt' always the case.
A very nice pen.