All pieces now in stock

The origin of theAVI-8 watch brand dates back to the 2000's in the United Kingdom. Its history begins when London-based Dartmouth Brands Ltd. decided to rely on the best materials and resources to honour both aeronautics and the untold stories of the aviators who have dedicated themselves, both inside and outside the cockpit, to bringing these incredible machines to life.

AVI-8 designs watches with a timeless style and a functional design inspired by the history of some historical aircraft, armed forces pilots or air force engineers to create versatile and resistant pieces with an unbeatable quality-price ratio. Using top quality materials, they manage to create unique pieces that go beyond the conventional aviator's watch.

Their pieces are robust and resistant, offering watches with cases from  42 mm to  45 mm, made of  stainless steeland some covered with  PVD. Many of their models have a more classic style, featuring  leather straps or  stainless steel bracelets with or without  PVD coating and others, however, have a more sporty style with  rubber straps.

AVI-8 offers us watches for all tastes. Automatic or quartz models, models with  chronograph, with  mineral or  sapphire glass or even watches with  case back crystal. But what really characterizes AVI-8 is its great quality-price ratio, offering watches for  less than 250 dollars and other models with more complications that  do not exceed 500 dollars.

The  Flyboy collection commemorates the 38 Escadrille Lafayette pilots who flew to France to fight as volunteers in the First World War. AVI-8 pays tribute to them through a collection of pilot style watches with a Japanese automatic mechanism inside.

The models in this collection are characterized by being resistant and durable pieces with advanced technology and certain touches of vintage air design. It is difficult not to be excited about finding such high quality and affordable watches, like our favourite,  AVI-8 Flyboy Lafayette Chronograph Quartz Watch in Black and 42 mm The watches belonging to the  Hawker Harrier II collection are inspired by the design and aesthetics of the famous plane to which it pays tribute to the name of this collection. This is a ground attack aircraft with vertical and/or short take-off and landing capabilities that received incredible technical improvements, such as the development of a lighter fuselage and a one-piece wing. Its watches stand out for their functionality, visibility, easy reading and use, like the  Hawker Harrier II Ace of Spades Automatic Watch in a beautiful green. The  Hawker Hunter collection is inspired by the instrument panel and cockpit of the famous Hawker Hunter aircraft, which broke the speed record in 1953, thus becoming one of the most emblematic models of the British air force.

Many of its models feature an octagonal casing, a vintage-inspired hand-stitched leather strap and piston-shaped buttons.

In the image below, the  AVI-8 Hawker Hunter Retrograde Edition The  Hawker Hurricane collection features sleek, sturdy pieces designed to respect the tradition and heritage of the famous Hawker Hurricane aircraft, which became famous during the Battle of Britain, where it won around 60 per cent of the RAF (Royal Air Force) air victories between July and October 1940, and served in all major World War II scenarios.

The red, blue and white Royal Air Force medallion can be seen on many of his watches, paying tribute to the fighter that gives the collection its name, as we can appreciate in the  AVI-8 Hawker Hurricane Merlin Edition Quartz Watch. With a refined and minimalist design, these watches show us the characteristic aesthetics and design of the Avro Lancaster aircraft, the famous British bomber used successfully by the British armed forces during World War II. The watches in  this collection have a vintage look and a railroad-style minute-markers ring that adds elegance.

The Avro Lancaster was mainly a night bomber, and AVI-8 wanted to pay tribute to this detail by illuminating the indices and hands of these watches for better night vision. The crown of these models is decorated with the Royal Air Force medallion.

In the following picture, it can be appreciated on the  AVI-8 Lancaster Bomber Cocktip Edition. The P-51, also known as the Mustang, was a single-seat, single-engine fighter aircraft originally designed and produced by the US Air Force for the Royal Air Force and later adapted by the US Army Air Force. The P51 is widely regarded as the best piston-engine fighter of the Second World War to have been produced in significant numbers.

Some of its watches feature leather straps inspired by the seats of the  P-51 Mustang and other stainless steel bracelets by H-link. Their multi-layered dials are a reinterpretation of the flight instrument displays. They feature both a chronograph and a tachymeter, as the  AVI-8 P-51 Mustang Blakeslee Chronograph. The  Spitfire collection captures the essence of the aircraft of the same name, one of the most iconic models in history. All Spitfire models additionally feature an interchangeable leather strap carefully presented in a beautiful strap, providing versatility for quick and easy style changes. If you would like to know more about this magnificent British watchmaker, please visit our website. At  Iguana Sell in Madrid, you will find an extensive collection of  AVI-8 pieces in stock that can be purchased with 24 hour express delivery.
And, of course, if you require more information or wish to place an order, please do not hesitate to  contact us. You can write us an  email, or visit  our shop in Madrid, in  Núñez de Balboa 90. It will be a pleasure to help you.
We are waiting for you! 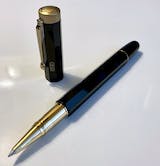 This is a gift so i am unable to review the pen , however the service from Iguansell was excellent

This is a lovely quality piece. It even has a little gold zip in the shape of a Visconti pen nib. 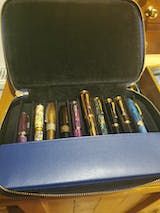 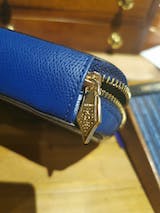 Quick delivery arrived in a 100% original package, so nice opening a box with a very pleasant smell of leather.

Great item - I am in love with it. Iguanasell were excellent in providing a prompt and efficient service. Will definitely buy from them again! Thank you.